My Vegan Camping Story: How To Cook & Enjoy The Best Plant-Based Meals In The Outdoors My parents met working in Yellowstone in the early 1990s. So, when they started having kids a few years later, we were always camping. My earliest memories are in the woods, in tents, and around fires. I was hiking before I could even walk (courtesy of my mother and father carrying me, even in the heat of summer). Camping is in my blood, and it shaped the way I see the world today. Nature is home- not a vacation from it, and because of this mindset, I always feel most myself while camping.

When I adopted a vegan diet in 2018, I didn’t even think about how hard it would be to find vegan camp foods. I had no idea how literally everything I ate camping had animal products in them, until I needed to buy camp food. At home, we didn’t eat much red meat at all, but while camping it was a different story. S’mores, hot dogs, dutch oven potatoes, tinfoil dinners, backpacking meals, dried salmon, jerky, breakfast sausage, and eggs all made up our camping diet- and none of it was vegan. I didn’t have any trouble veganizing my diet at home, but this was a giant learning curve.

So, I had no idea what to pack the first time I went camping as a vegan. I wanted to make sure my meals would be filling, full of nutrients, easy to assemble, and delicious. Could anything replace the heartwarming satisfaction I had gotten from the four ingredients in Dutch oven potatoes—bacon, cheese, butter, and potatoes? I didn’t think so. I thought I would be stuck eating dried fruit, nuts, and chips. Looking back, I think a giant blockade to adapting was imagery. We are fed from birth what being in the great outdoors looks like. It generally includes white people crowding around a fire, eating hot dogs and s’mores, and then climbing into their $1,000 tent from REI. They wake up, and have rustic scrambled eggs over the fire and crumbled breakfast sausage for breakfast. Before this imagery? It was cowboys in the wild west eating a meaty stew around the fire. It was about masculinity, and braving the wilderness—and what is more masculine than steak and potatoes? Today, people still have those ideas about being in the woods, and it shows in the food we associate with it.

Of course with these images in mind, I had a hard time picturing what I could even eat while camping. It wasn’t until I was broke in Iceland, that I dismantled the rules of camp food. I realized that anything I could cook over a fire was fair game, and being broke, I went for things that would be cheap and require few ingredients. I was hiking and climbing all day, so I needed filling, nutritious, and hearty meals too. It ended up being a breeze. Rather than looking for specific ingredients for specific dishes (for example, going to the store looking for hot dogs and s’mores ingredients), I looked for things that I would be able to cook over a fire. I grabbed cans of beans (pinto, black, and an Icelandic type covered in a tomato sauce), brown rice, garlic, oil, onions, tortillas, peanut butter, wheat bread, boxed soup, canned corn, apples, and oats. I also bought blueberry juice, salt, rice cakes, tortilla chips, and a box of Icelandic cereal that looked like corn flakes. I knew these ingredients would last for the month, and they could be combined in a variety of ways. On top of that? They were filling and delicious.

After a two-day hike through glaciers, I made a big pot of rice and two types of beans with garlic and onions. When I’d get back from a coastal walk along a black sand beach, I made peanut butter sandwiches with blueberry juice. In the morning after a night of cold winds in the north, I made oatmeal with apples. Throughout the day I snacked on rice cakes and cereal. I made burritos over the fire for dinner many times, rice and pinto and onion skillet for breakfasts, and feasted on Nordic boxed soups filled with veggies. It was simple, but so is typical camp food. What’s complicated about a potato with bacon on it? This stuff was just as tasty, even more filling, and gave me tons of energy for my adventures. 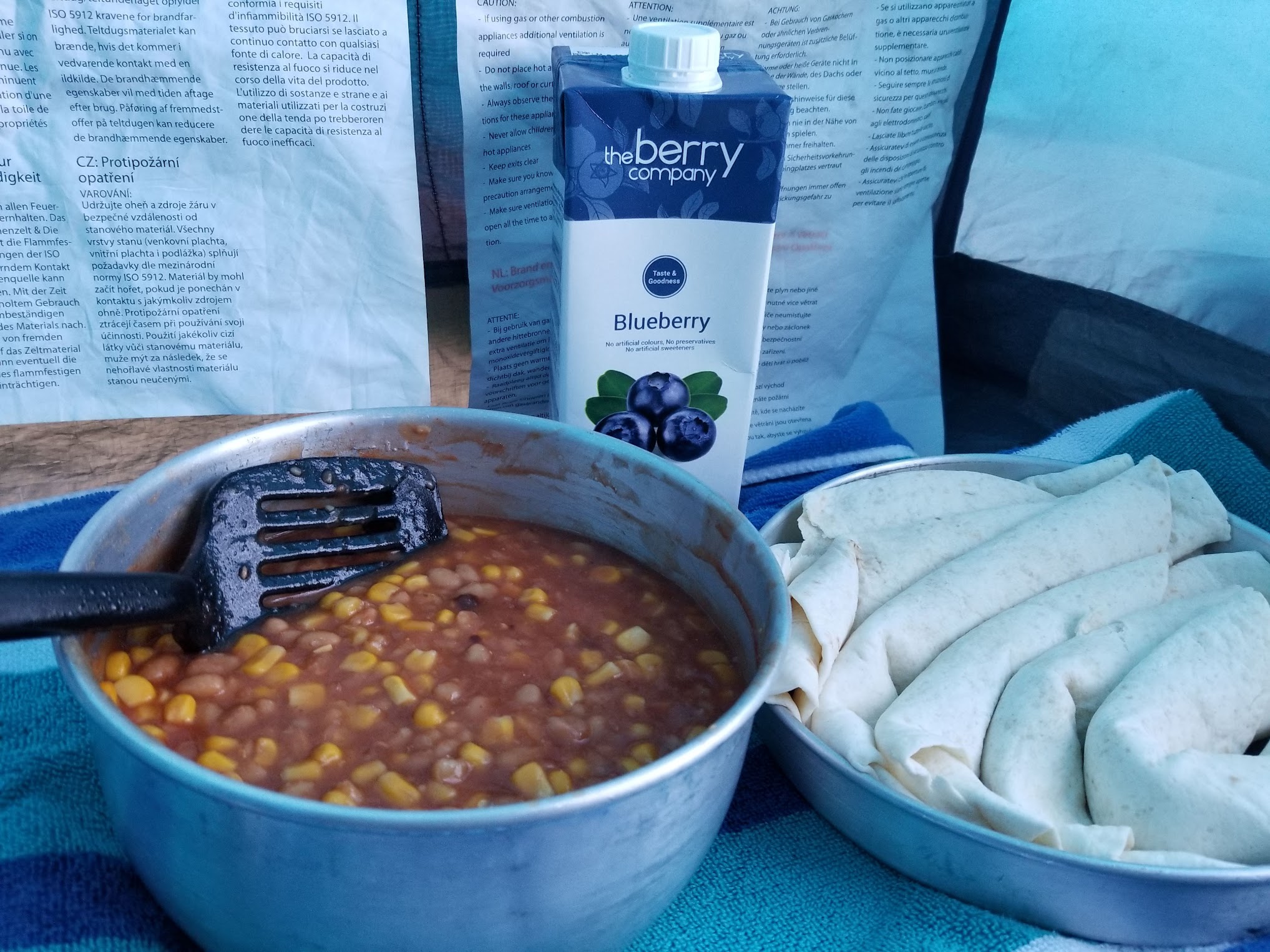 I remembered that when I got home, and went on other camping trips. I didn’t need to eat rabbit food while in the mountains. Making anything over a fire feels wholesome, and makes me feel connected to the Earth, but when it’s hearty? It’s unbeatable. I never worried about camp meals again.

I’ve made potato hash, roasted apples, stews, tinfoil dinners, and curries while camping, and I haven’t felt like I’ve been missing out at all. I’ve eaten carrot stew in Norwegian fjords and baked beans along the Appalachian Trail. I wouldn’t trade any of that for processed meat and flavorless buns. This is so much better, and when I do want something more traditional, there are so many vegan options out there. For hotdogs, I love Beyond Meat or Field Roast sausages. I also love Beyond Meat for breakfast sausage, and Just Egg to go with it. There are vegan bacun crumbles and plant butters to add to dutch oven potatoes, and vegan mayo to put on veggie burgers. And when I really want a s’more, I use coconut cookies (I’ve always liked them better than graham crackers anyways), vegan chocolate, and Dandies vegan marshmallows. It’s way tastier, but I don’t have to just have s’mores for dessert. I’ve expanded the way I view camp meals, and that includes the sweets. I make apple cobblers, blueberry skillet cakes, and oat milk hot cocoas now. Honestly, I’ve never eaten better as a camper. I just wish it felt more accessible at the beginning, because while veganism is now a trending topic, not much is published about camping while vegan. So, here are my tips to make it easier for other people trying to be vegan, even in the great outdoors: 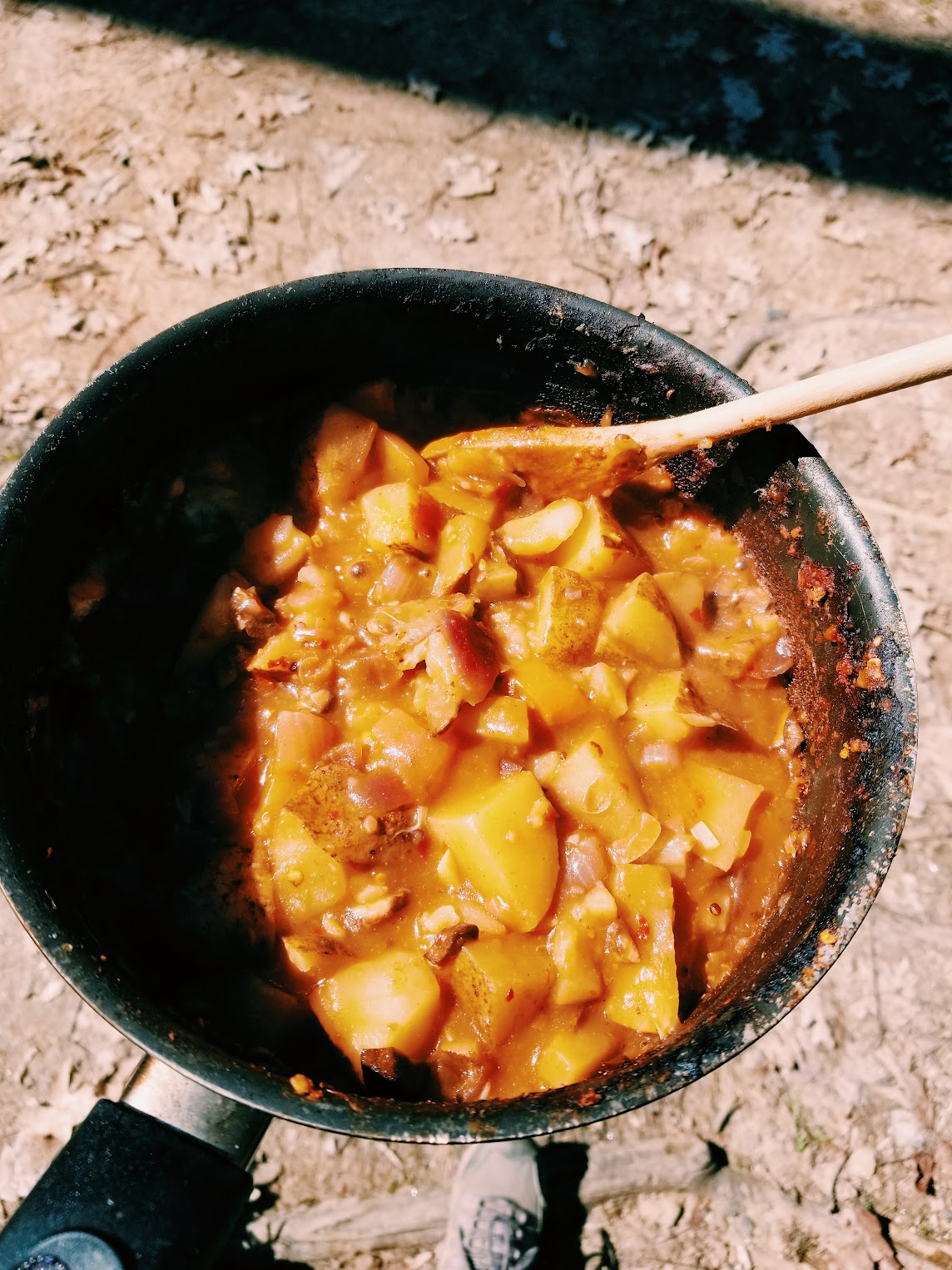 I now look forward to cooking while at camp, and I can’t wait to go again when it cools down a little. Being a vegan doesn’t have to be a pain while being outdoors. I don’t even think about it now, and I wish that for everyone trying to do good and cut animal products out of their diet. It takes some rethinking, but it’s even better than before. I promise.

PSA: Many Dark Chocolate Brands Contain Heavy Metals. What You Need To Know
I Tried LeafSide Meals, Whole-Food, Plant-Based Meal Delivery Service. Here's My Review
5 Vegan Nutrition Tips for Healthy Nails
Drinking Lemon Water Every Morning Changed My Life. Why This Is More Than A Trend
PREVIOUS
10 Ethical Yoga Brands That Give Back & Make Seriously Amaze Clothes
NEXT
Getting Extremely Sick Changed My Outlook As A Vegan Advocate
TAGS
healthy eatingvegan travel
SHARE