View of Buda from across the Danube

Along the Danube river lies another European treasure, Budapest.  What was not even going to be a destination on my trip turned out to be one of my favorite cities.  Budapest has a friendly, laid back vibe which pulses with energy and creativity.  Budapest has been ruled over and repressed throughout much of its history, so it is clear to see why they now have such a free and independent spirit.

Their appreciation for freedom can be felt all throughout the city and is seen immediately when looking up towards Gellért Hill at the Liberty monument.  The main part of the monument is the statue of a woman holding a fig leaf, meant to signify peace.  What was originally given during Communist rule actually came to signify something different after the regime had fallen–liberty.  This particular statue spoke to me as I hiked to the peak while extending gratitude for my own freedom and reflecting on the choices in my life that had led me to that exact moment where I was, traveling to a foreign land, experiencing a new culture, and looking out at a beautiful view. Me in front of the parliament building.

Budapest is separated by the Danube river and was once separated into three different settlements, Oduba, Buda, and Pest.  After the Chain Bridge was built, connecting both sides of the city, the merge became easier, and in 1872, these settlements were united into the current city of Budapest, and it was established as the capital of Hungary.  The difference between the two sides of the city is still felt today.  On the hilly Buda side, you can walk up to get a view of the city, explore the caves that lie below the surface or soak in one of the traditional Turkish bathhouses.  Since this side was under Ottoman rule, the bath houses there are original, authentic and beautiful (more on those later!)  The Pest side has the more contemporary offerings of hotels, cafes, and bars.

Like the other cities I visited, Budapest also has a long and interesting history, but for some reason, I felt compelled by the Hungarian people’s story, especially the pattern of oppression that is repeated.  Several times throughout their history, they were freed from an oppressor only to then be taken over by another.  As happened with the Turks, the Nazis, and later the Soviets.  The Hungarian people, looking to just live peacefully are repeatedly occupied and controlled by a stronger force.  I noticed here a parallel to society today in that many lawmakers and corporations are so motivated by money and power that they place that above the health and well-being of the people.

In Budapest, the architecture is beautiful and varied.  After world war II, nearly 40% of the city was bombed out and buildings were rebuilt during the Soviet rule.  The difference in architecture is clearly seen throughout the city with beautiful baroque buildings sitting next to the plain stark lines typical of Stalinist architecture.  Perhaps the most impressive building in the city is the magnificent Hungarian Parliament.  It sits right along the Danube and is the third largest Parliament building in the world.  It’s Neo-Gothic architecture is beautiful during the day, but perhaps even more impressive at night when it’s lit up.  It was my absolute favorite building in the city, and each time I walked past it, I found something new and interesting to love. Whether you want to have a relaxing vacation enjoying nature and getting spa treatments or go out dancing until 4 AM, Budapest has something for you.  The Danube is the main lifeline of the city and is always busy with boat traffic.  There are many options for sightseeing cruises, so for our first night there, we opted for a wine tasting cruise.  It was a wonderful opportunity to taste some Hungarian wines as they don’t export them widely, only to neighboring countries.  During our cruise, we connected with a few fellow travelers from Dublin who joined us for the next part of our evening.  Perhaps the coolest part of Budapest’s nightlife are the many ruins pubs around the city.

Ruins pubs are all born out of massive abandoned buildings (think old factories, department stores, apartment complexes) that have been eclectically decorated and turned into bars.  They have interesting, off-the-wall décor, and each one offers something different.  My favorite was Szimpla Kert, one of the first ruin pubs. This abandoned factory now has a funky, DIY vibe with mismatched furniture, a hookah bar in the front along with a large dance floor and a massive open air courtyard.  When you’re with good people and the wine is flowing, 4 AM just kind of sneaks up on you.

Since life is all about balance, it is important to slow down and relax after all that dancing the night before.  Having had no prior knowledge of Budapest, learning that there were natural thermal baths right in the city was a happy surprise for me.  Most of the baths are located on the Buda side of the river where the natural springs are. The geothermal baths contain minerals, such as sulfur, which can promote healthy skin.  Sulfur has been known to soothe irritating skin conditions, aid in detoxification, and promote collagen production.

Not only are the baths relaxing but the buildings themselves are works of art with their high ceilings and detailed mosaics.  Rudas bath was a favorite of mine, mainly because of their rooftop pool, which you can soak in while taking in views of the city and Gellert hill towering right behind you.  We arrived close to sunset and were treated to beautiful city views.  It was one of those blissful moments where I had to pinch myself to ensure I wasn’t in a dream. 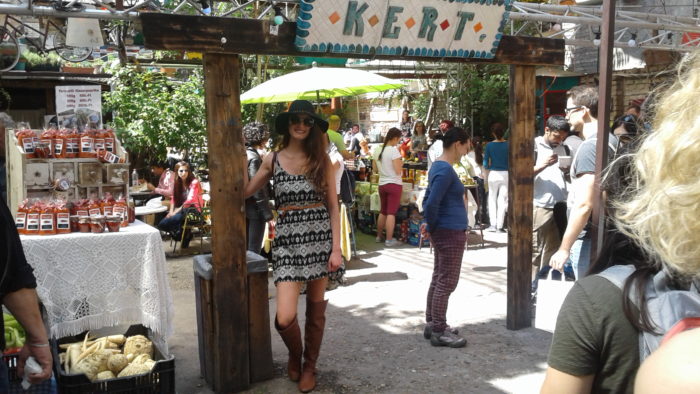 As with the other cities, I was pleasantly surprised by the amount of plant-based food options I had.  The traditional Hungarian dish, goulash, is a heavy and caloric meat-based dish, but there are so many contemporary restaurants and cafes offering a new and different twist on Hungarian food.  After a walking tour of the city, I met my friend for a long, leisurely lunch at Slow

After a walking tour of the city, I met my friend for a long, leisurely lunch at Slow Foodiez, a small vegetarian café downtown.  Their menu had healthy versions of comfort food and offered vegetarian, vegan, and raw options.  The stuffed cabbage dish I had was a unique, healthy version of the traditional dish.  While you can certainly find traditional Hungarian restaurants, the city has so much more than that to offer.  The influence of the Ottoman Empire is still seen in the many Turkish restaurants throughout the city.  Some of the best falafel I had was from a small stand right down the street from where I stayed.

Remember those ruins pubs I mentioned? Well, on Sundays, certain ones are transformed into a market. What a happy discovery since my favorite Sunday activity just happens to be strolling through the market. I arrived to find it bustling with tourists and locals alike, sipping espresso and beer and enjoying live music while shopping the many vendors.  It is one of the most unique markets I’ve been to with all the colorful, eccentric décor.  They even offer a farm-to-table breakfast for a set price.  Walking through the vendors, I found produce, breads, jams, and spices.  I was able to find some Hungarian paprika to add to my spice rack back home.  My favorite part of the market was the weekly soup bar which offers a different soup each week with the proceeds going to a local charity.

Budapest is a unique city that has both a rich history and contemporary, creative energy.  Something unexplainable directed me to the city, and I am grateful that I tuned into the signs and let life lead me to where I was meant to be.