Although Norway isn’t the only place you can find fjords, it has over 1,000 of them along its coastline, making this one of the most unique and arresting places on Earth. Not only that, you get other breathtaking natural wonders: woodlands, meadows, craggy shores, and up in the North, a starkly beautiful Arctic ecosystem. Norway is also one of only five nations in the world where polar bears live–a huge plus for yours truly, a polar-bear enthusiast.

Not only is Norway’s nature unbelievably beautiful, its chic cities have an elegance and style all their own. For those who love the tranquility of the countryside *and* the sophistication of cities, Norway is an incomparable destination.

I get the impression that Norwegians are very reserved; when I land, the airport attendant tells me brusquely to go downstairs before I even finish asking my question. After being treated like a queen in Amsterdam (not b/c am special, but b/c Amsterdammers just so darn nice), I feel kinda intimidated. There are about five people at the airport, and I could possibly be the only tourist. I ride the train to Oslo’s National Theater station and check into Hotel Christiana Teater. This jewel-box of a hotel is ISO 14001 certified (EU environmental management standard) and is in one of the oldest buildings in Oslo, near the National Theater, the Palace (Slottet), and other landmarks in Central Oslo West. The hotel bar is small but utterly chic, and the apple sorbet bellini is incredibly delicious.

Breakfast is fresh, warm bread, jams, and fruit, plus tea in the lovely upstairs restaurant. I want one of those mini tea holders! <3 I pick up my pre-paid tickets at Oslo Central Station without a problem. (Note: I purchased a set of bus/train/boat tickets on Norway in a Nutshell.)

On the train ride to Bergen, Norway’s fabled scenery quickly begins to unfold. It starts with regular mountains and valleys that somehow resemble the Columbia River gorge more than nearby Iceland. But pretty soon, my heart leaps at the sight of snow. It feels eerily like going back in time to winter as the train goes up in elevation…until everything is white outside. The ribbons of aquamarine rivulets cut through the glaciers. The truly surprising thing is that up here when it’s like this in mid-May, there are electric towers and little hamlets of 1-5 houses, surrounded by at least four feet of snow. I try not to worry about how those people go grocery shopping–I’m sure they have a system in place.

The landscape changes again as the train descends the mountains. This time, it’s all roaring emerald rivers from melted glaciers. It’s been said that this is one of the prettiest train rides in all the world, and I think it must be true.

After about six hours, I finally arrive in Bergen, a postcard-ready seaport town with a totally different feel than Oslo. The first word that comes to mind with Bergen is “cozy” (which isn’t Oslo at all). It is situated on rising hills surrounding a sapphire blue harbor; colorful, gabled houses line the wharf (called Brygge) and dot the wooded hills.

I walk up the mountain to see where the funicular is but fail to find it (oops). But I’m less concerned about doing everything correctly and more about enjoying myself. Even while making fun of Bergen for being teeny, I fail to find the funicular. Tsk tsk.

After hiking and zig-zagging around Bergen’s numerous pretty squares, I tuck into dinner at Pygmalion. There are no expressly vegan restaurants in Bergen, but Pygmalion satisfies. The vegan burger with sweet chili sauce and potatoes provencal is the heartiest dish I’ve had in Norway so far, and I gobble it up. I ask my kindly waiter for pointers on going out in Bergen. (By this point, I’ve decided that Norwegians will open up if I keep being the “friendly American,” and it seems to be working.) He says to avoid bars next to the water (too touristy) and that “old people” go out at 9ish, but “young people” go out at around midnight after pre-gaming hard. “We have a drinking problem,” he adds with a resigned smile, as I’ve noticed Norwegians do when they admit to their drinking problem.

Back in my hotel, I work on PD, shower, and change into a dress. Since starting at midnight is ridiculously late for me, I head out around 10 pm to a super cool cocktail bar called No Stress. Though I don’t make Norwegian friends, I talk the entire night with a couple of man-bunned Stockholmers in town for music business.

By the time I leave at 1 am, the entire area is flooded with the sound of music and people drinking and talking outside. Just like Reyjkavik is a surprisingly hoppin’ city to party in, so is Bergen. Also, the Norwegian joke about how people here are very stiff-lipped until they have two drinks in them appears to be…true.

I catch the bus to Norhelmsund, where I transfer to a boat to Eidfjord. For the next several hours, I’m treated to some of the most spectacular scenery on the planet as the boat weaves in and out of fjords, surrounded by majestic snow-covered hills.

The boat docks at Eidfjord, and we transfer to a bus. The bus driver plays a recorded tape that explains the Norwegian countryside and history; it pauses for “Solveig’s Song” by Edvard Grieg, Norway’s greatest composer and a figure whose melancholy presence is felt everywhere here. The bus winds around snow-covered peaks, to the top of Voringfossen, which is one of the most visited attractions in Norway. When you’re there, it’s easy to see why–it’s not the volume of water that impresses, it’s the magical, dreamy shape of the valley and the waterfalls from all sides. Afterward, I take another boat to Ulvik, a fairytale town on its own crescent-shaped fjord. I’d picked the village solely based on the enchanting photos of its apple orchards, supposed to be in full bloom right during my trip. Delicious vegan lentil soup for lunch at Dros, the only consistently open restaurant in tiny Ulvik. So simple yet perfect after a day in the mountains.

My hotel is small and modest, but the windows look straight out at the fjord, and I have my own private patio, about seven feet from the water’s edge. I could totally just read a book by the water, but I change into my hiking boots and go for a hike. 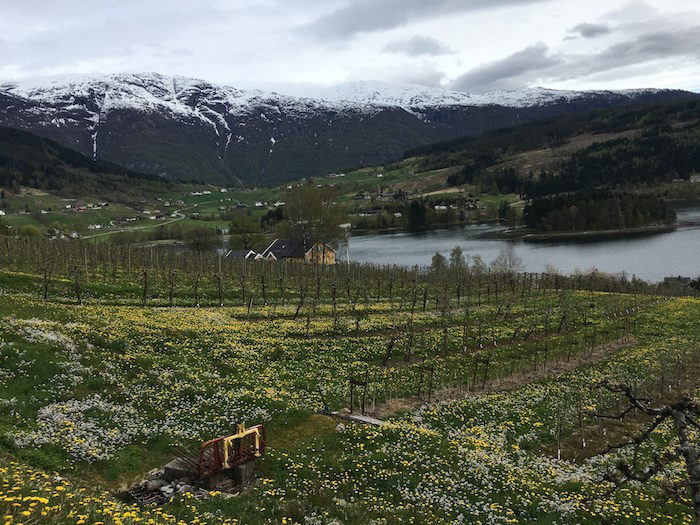 As you can see, it’s like walking into a fairytale. The apple trees are in bloom, the sun is dappling, and the only sounds I hear are birds, rushing creeks, mini waterfalls, and lambs.

Walking alone surrounded by this majestic beauty, I think about why I chose to spend my 30th birthday traveling solo instead of at home. I’d wondered if I should spend it with friends and family in NYC, but I’d kept saying to myself “hiking in the fjords of Norway” and that made me the happiest. And here I am, exactly as I’d dreamed for about six months. I feel like the combination of a brave little toaster and a worldly 30-year-old woman. I walk across this soft field of purple and yellow wildflowers back to my hotel. Sigh.

In my room, I work on Peaceful Dumpling, take a hot shower, and sit outside on my patio. It’s so beautiful and calm it hurts. My whole body and soul are being cleansed from all the chaos of my life in NYC. View from my patio. At 11:30pm. It is still light enough to see the glaciers. Such a strange beauty.

The entire day is spent on the bus and train back to Oslo, but I’m rewarded with an *amazing* dinner at Nordvegan, one of very few vegan restaurants in Oslo. The bechamel sauce lasagna is so good I want to eat it forever. And so is the vegan cheese-filled pie–one of the most unique vegan restaurants I’ve ever eaten in, for sure.

Next, I check back into Hotel Christiana Teater, and my room this time is even nicer, bigger, and has views! This is my view for a night. I feel like a princess! The Royal Palace is literally a five-minute walk away. To celebrate my last night, I get dressed up and walk along Karl Johans Gate, the main road that leads to the Royal Palace (above). I love how there is no one around in Oslo, it’s like a balm to my New Yorker soul. My concierge had recommended checking out The Thief Hotel bar for cocktails, so I walk over to the ultra trendy and modern Tjuvholmen area on the water. Slavo, who created the cocktail program here, doesn’t actually appear in black and white in person. But he may as well, since he’s the most dapper and handsome mixologist ever. Plus he asks if I like chocolate (“Yes, I do!” I squeal with delight) and gives me dark chocolate garnishes to nibble on. <3 After many drinks, I end up at Himkok, an utterly cool speakeasy that’s actually open at 3 am on a Sunday night in Oslo–and filled with beautiful and trendy people. Since I can’t find speakeasies even in NYC, it is one epic night out to be sure. My last meal in Oslo: Fragrance of the Heart vegan cafe was right near by hotel, and I could eat this baked tofu plate with creamy tahini dressing every day. So bomb!

One more lap around beautiful Oslo. I take a morning walk around the brygge and the medieval Akershus Fortress.

It’s astonishing how just four days can change your perception of a place from cold and unwelcoming, to lovely and incomparable. I find it really hard to leave Oslo–it’s only because I know I’ll return that I can go happily. How to Nail Eco-Glam, Carbon-Neutral Travel That Leo DiCaprio Would Approve

PREVIOUS
10 Best Backpacks For Summer—Eco-Friendly, Vegan, And Seriously Chic
NEXT
Why I Switched To Vegan Fashion From Fast Fashion & How It Changed My Life
TAGS
SHARE