For the most part, when someone reports a cougar (or puma, or mountain lion) sighting east of the Mississippi, they’re mistaking a bobcat or other large predator for the charismatic Puma concolor. In a small section of Florida (mainly in Collier, Lee, and Hendry counties), however, they might be right. That’s because there’s a subpopulation of cougars fighting for survival in the southern half of the state. Although titled Florida’s “State Animal,” these big cats are continuously threatened by habitat loss and fragmentation, mercury poisoning, and harmful interactions with humans such as vehicle collisions.

While the United State’s only resident big cat goes by various names across the country, the Floridian subpopulation is known distinctly as the Florida panther (Puma concolor coryi). Only a hundred or two hundred of these predators are thought to remain in habitats ranging from tropical and pine forests to freshwater swamps and associated woodland areas. Although the species as a whole is not classified as such, the Florida panther subpopulation is classified as an endangered species under the federal Endangered Species Act of 1973. 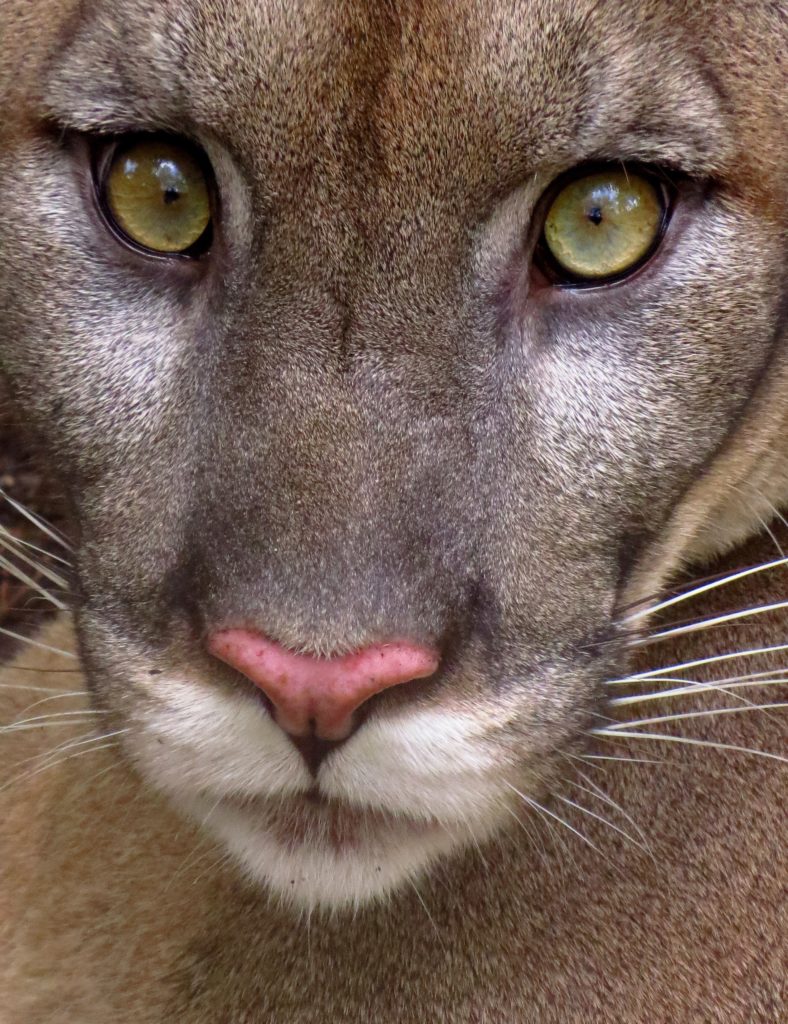 As large predators like puma and wolves were extirpated from the region, the white-tailed deer has become overpopulated in much of the Eastern United States. Thanks to this, we’ve seen a major increase in dangerous vehicle collisions as well as an increase in tick-borne illnesses like Lyme Disease. Overpopulation of prey species (and the consequences that come with it) is a commonly-recorded occurrence as a result of an ecosystem losing its apex predator. As an apex predator, the Florida panther plays a critical role in controlling the state’s white-tailed deer population.

Since the 1990s there has been a collaborative effort to create the “The Florida Wildlife Corridor.” Joining together parks, preserves, and other pieces of protected habitats would ensure safe homes (and genetic exchange) for Florida panthers and numerous other species across the state. In 2021, the state allocated $400 million for acquisition of environmental lands. The Florida Wildlife Corridor Foundation is dedicated to creating this permanent protective land connection for Florida’s wildlife.

In 2021, the Florida Fish and Wildlife Conservation Commission reported that 70% of the year’s recorded Florida panther deaths were caused by vehicular strikes, with 2022’s data already aligning. Just this summer, Florida recorded the 18th Florida panther killed by vehicle collision: a 2-year-old female. The group PantherCrossing.org is dedicated to preserving the Florida panther through reducing roadside mortalities. Their campaigns aim to convince people to mind speed limits, especially in designated “panther zones.”

Wildlife crossings are an increasingly popular way to protect species like the Florida panther that suffer from high vehicle collision rates. In the early 1990s, the state built twenty-four wildlife crossings and 12 other bridges modified for panther use along Interstate 75 in Collier County. There are currently over 60 of these panther-friendly bridges across the state and studies show a decrease in vehicle collision and mortality in these areas.

Another, perhaps surprising, threat to this cougar population is that of mercury (Hg) poisoning. Mercury contamination is well-recorded throughout the Everglades and other Florida habitats, likely stemming from “metals mining and smelting, coal-fired utilities and industry, and solid-waste incinerators.” This poison bioaccumulates up the food chain with Florida panthers consuming the most of it from their prey species.

While historically Florida panthers frequently exchanged genes with other pumas, their population has become completely isolated. Genetic restoration has been successful, however, with scientists introducing eight female pumas from Texas to the population in 1995, successfully increasing the number and genetic diversity of these big cats. Scientists are confident that with continued monitoring, genetic management strategies will continue to help the population grow healthily.

The US Fish and Wildlife Service (USFWS) is also taking advantage of technology to increase awareness of these big cats while endearing them to audiences across the country. Trailcams (also known as camera-traps) are used to capture photographic evidence of wildlife without disrupting them in person. Other organizations, including nonprofits such as fStop Foundation, also seek to spread conservation awareness through photography.    Besides regulating prey species like deer, hog, and racoon, Florida panthers serve as an umbrella species for conservation efforts in Florida. By protecting them (and the wild areas where they live), all the animals and plants within the ecosystem benefit. This lone population of America’s largest cat fighting for survival in South Florida is a reminder that no matter how great the damage we’ve done to wildlife, there’s always hope for recovery when political will and science combine.

This World Cup Was Built On Human Rights Abuse. It's Also Speaking Up For Human Rights
Get Dirt-y With Soil Activism: A Growing Movement That's Putting Soil Health First
Can Ranked Choice Voting Bring Power Back To Voters & Save Democracy?
Fact: Most Of Us Ingest Microplastics. How To Avoid (As Much As Possible)
PREVIOUS
Be Happier With “Memento Mori”: The Meditative Art of Dying & Living Well
NEXT
How Sticking To A Morning Routine Helped Me More Than Years Of Therapy
TAGS
conservationendangered animalsenvironmentnews
SHARE