Best Vegan Beer List For All Your Summer Drinking (Excited Yet?) Nothing says Memorial Day like good friends and a cold beer. Many plant-based eaters may assume that all beer is vegan, but that’s unfortunately not the case. While the majority of beers on the market are in fact vegan, it’s important to watch out for animal-derived ingredients that are added either in the beer-making process or present in the bottle itself. If you’re looking for vegan beer to sip on today, grab a six-pack of one of these mouthwatering vegan beers on the way to your Memorial Day celebration. Though pilsners are a European staple and have been enjoyed in America since the 1840’s, this refreshing style of lager is having a serious moment in 2017. Brooklyn Brewery’s German-style pilsner is an amazing choice for this trendy beer. It’s a light and crisp lager that is ideal for pleasing a variety of beer drinkers–and a delicious addition to any celebration.  Brewed from German barley malts, it is simple with subtle complexity, containing a slight bitterness and a floral aroma. Brooklyn Brewery prides itself of crafting clean beers, and this pilsner doesn’t contain any cheap fillers. If you’re looking for something simple but memorable, this pilsner is perfect. 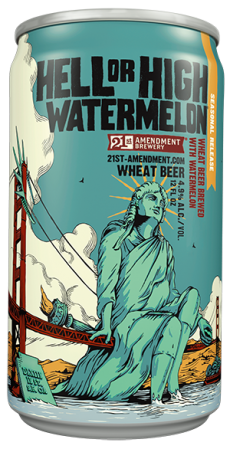 Nothing says warm weather like the incredibly refreshing Hell or High Watermelon. This fruity wheat beer from San Francisco contains subtle watermelon notes that don’t overwhelm this classic American style. It’s unique but approachable and sure to be a great conversation starter at your social gathering. If you’re an adventure-seeker who likes your beers complex and fun, you can’t go wrong with Tank 7. This farmhouse ale contains a multitude of flavors that progress as you drink it, from bright citrus, to floral and fruity, with a dry, warm finish. Based in Kansas City, MO, Boulevard Brewing is one of the largest craft brewers in the Midwest–and for good reason. All of their beers are interesting, high-quality, and unique. They are also committed to sustainable production methods that allow you to enjoy a bottle without worrying about its environmental impact. If you tend to favor ciders and wine over beer, a gose (pronounced go-suh) may be the perfect style for you. This traditional German-style wheat beer is brewed with salt and coriander, making it reminiscent of kombucha. Westbrook’s version has received plenty of accolades and was even hailed as one of the best beers in the world by Serious Eats. Packed with flavor, this fruity and acidic light-bodied beer is tart and refreshing without being overpowering. It’s zippy, mouth-watering, and perfect for a warm day in the sun. This delicious IPA is a classic ride-or-die favorite of hop lovers everywhere and sure to be a hit at your summer parties. Located in Galesburg, Michigan, Bell’s Brewery is highly regarded for its delicious, high-quality beers and the Two Hearted Ale is no exception. This well-balanced beer contains hoppy aromas of pine and grapefruit, with fruity aromas and structured malt character. It’s repeatedly rated as a top beer in the United States by both consumers and brewers alike. If you haven’t yet tried this amazing ale, named in homage to Ernest Hemingway’s short story “Big Two-Hearted River,” now is the time to get your hands on it. Sierra Nevada’s most popular beer is a cult classic that’s suitable for basically any occasion. It’s hoppy and balanced, with light caramel and toasted malt. This brewery is one of the most highly-regarded in America, and in many ways, it paved the way for independent craft brewers in the country. If you’re looking for a perfect classic that everyone is sure to love, you can’t go wrong with this faithful favorite.

Have you tried any of the vegan beer on our list? Which vegan beers would you add?

3 Summer Cocktails To Rock Your World