When I think of China in a vegan context, the first thing that comes to mind is the moment in 2012 when Urban Decay announced that they planned on selling their products in China. A controversy ensued because regulations in China are such that all cosmetics sold must undergo animal testing, and Urban Decay had proudly touted their Leaping Bunny logo up until this point. There was a huge outcry from vegans everywhere causing Urban Decay delay sale of their products in China until the government allowed non-animal forms of testing (which happened in 2014 for companies that manufacture in China).

It makes me cringe to write this, however, because China comes out as some axis of anti-animal evil, as it tends to with any reference to vegetarianism. Every blog post and every article I’ve read on the subject comes to one definitive conclusion: impossible. So I’m here to tell you that I did it. Not in a big city, not during a month-long vacation, but for two entire years in a rural village in Yunnan.

Yunnan is the most southwest province of China, bordering Myanmar, Laos, and Vietnam. Even within China, Yunnan is thought of as an adventurous travel destination and a backpacker paradise. Rich in ethnic minority culture and famous for rice terraces, stone forests, and snow-capped mountains, it was a rare gift to live there. 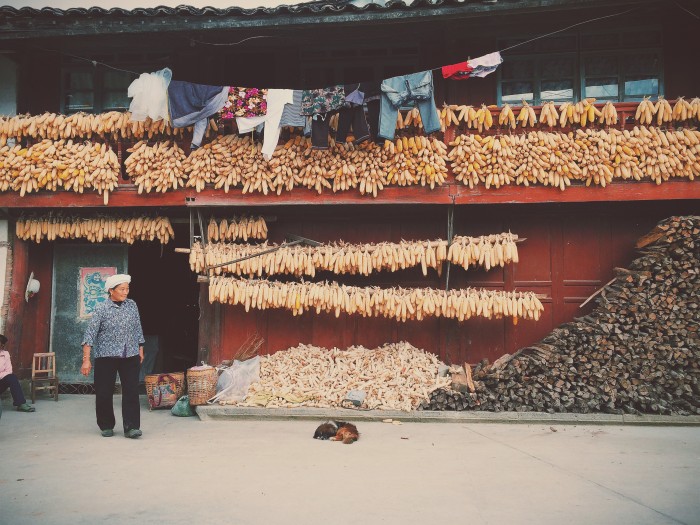 It was a teaching fellowship with a nonprofit called Teach For China that brought me there. I lived at school along with five hundred students and twenty-five other teachers. During my first meeting with the principal, I revealed that I didn’t eat meat and no, not even eggs. Chinese only has a word for vegetarian, though vegans are sometimes referred to as “strict vegetarians.” Milk and dairy aren’t commonly used in Chinese cooking, and soymilk is a breakfast staple. Unfortunately, he informed me that the school’s cafeteria predominantly used pork lard instead of vegetable oil. “No problem,” I said, “I’ll cook for myself.”

I ended up picking up a wok maybe three times, the few instances in which I could convince the other teachers that I actually wanted to cook Indian curry with my friends. The teachers all agreed to use canola oil for the vegetable dishes, and if there was a vegetable that no one liked without lard, such as bitter eggplant, the cook would make me my own special batch without. She frequently gave me my own pot of whatever boiled greens we were eating since she knew I loved them.

Speaking of bitter eggplant, my palate changed entirely during my time in Yunnan. Their style of cuisine is particularly sour and spicy, and I initially hated the pickled vegetables and anything too bitter. But by the end of my first semester, I was requesting personal batches of pickled vegetables from the teachers that made it themselves. And by the end of my fellowship, a bowl of noodles was inedible without a long, hearty pour of vinegar. Now that I’m back in the US, nearly everything I make gets a handful of pickled vegetables from the five-pound tub my close friend made me as a farewell gift. Local crops ranged from canola, rice, and persimmons all the way to tobacco. I loved going to market, which was held every five days along the main road in town, and seeing all the fresh and local fruit, vegetables, teas, and wares. I got my hands on a lot of dragon fruit, oolong tea, dried green papaya, and local mushrooms during my time there.

But what about traveling and leaving the sanctuary of my school’s kitchen? I’ll admit, sometimes it was a challenge to find vegetarian fare and I often incited much confusion. It’s not that vegetarianism is unheard of—people would often say to me, “Oh, my grandmother does that” or, “I go vegetarian for a month every year!” China has a sizable Buddhist population who eat largely vegan diets; you know you can always get a vegan meal inside or near a temple. But most restaurants’ chief concern is taste, and there is still a meat-tastes-good mentality. That was usually the hardest part: convincing chefs that I really just wanted vegetables.

Luckily, the cheaper the restaurant, the easier it was to eat. The simplest and most authentic restaurants were those we fondly called “fridge places” where their produce was visible through a display fridge. You pick out what you want, always one more dish than the number of people eating, and each is prepared separately. My favorite dishes were pinto beans fried with pickled vegetables, pan-fried eggplant, smoked cabbage, spicy lotus root, and as I mentioned earlier, stir-fried bitter eggplant. I lived in a city famous for a pea pudding called wan dou fen (豌豆粉) which is vegan. It’s made by mashing up peas without their skins, and adding water until it congeals. The paste can either be formed into thick blocks or served hot as more of a porridge. It’s hard to describe in an appetizing way, but it’s one of those foods that is made by toppings: red pepper, Sichuan pepper, green onion, dried and oiled chucks of garlic, ginger, sesame oil, cilantro, soy sauce, and of course, pickled vegetables.

The way I see it, eating vegan anywhere can be hard to tackle until you work out routines, good restaurants, and in my case, until you buy a blender. I believe that it’s possible to eat vegan anywhere in the world because no one consumes as much meat and cheese as the Western world. And as my omnivore friends proclaimed, China sure knows how to cook a vegetable.

Have you been to China? What was your experience like? Do tell!

8 Tips to Being Vegan in the South

A Guide To Santiago De Compostela—One Of The Most Beautiful Cities In Spain
For French-Style Cuisine & Culture In North America: Best Vegan Restaurants In Montreal
Vegan Options at 10 Major Restaurant Chains: How To Eat Well Even On Group Vacations
The Ultimate Guide to Eating Vegan In Los Angeles
PREVIOUS
5 Reasons Costa Rica is a Vegan Travel Destination
NEXT
Love: Why Disagreements Are A Good Thing
TAGS
vegan travel
SHARE

Aubrey Gates King
Aubrey Gates King is currently living in Portland, OR after having spent the past two years teaching in China. Her hobbies include biking and hiking, cooking spicy curries and eating her weight in fruit, reading transnational novels and writing lyrical prose. You can find her lingering in the local park or Zen temple.
View all author posts →