Who do you picture when you think of a vegan?

Your answer might depend on who you are, and the vegans you’ve encountered in your life. After compiling the “data” you collected from your personal experiences, you might be left characterizing your vegan friends or pulling from what you’ve seen in the media. Those with no personal contact to vegans might revert to common vegan stereotypes or the vegans they see online. Even for me, being a vegan myself, I don’t really know other vegans IRL with whom I can compare my experience. For myself and others, who we think vegans are is restricted to what we see online.

So what does that leave us with? Hippie, strict, healthy, weak, thin, are just some of the stereotypes non-vegans have been found to perceive of vegans. Upon reading online blogs searching for perspectives on vegans, I saw stronger words used like entitled, elitist, preachy, arrogant, and superiority complex. Specific demographics may come to mind like white, female, and middle or upper class.

It’s clear that some of us might have a stereotypical image of what a vegan looks like in their head. But how accurate is it? Looking at results of recent polls and research may provide us with data-based clues.

A 2018 Gallup poll concluded that 3% of Americans identify as vegan. But the percentage differs by age, income, and political ideology. 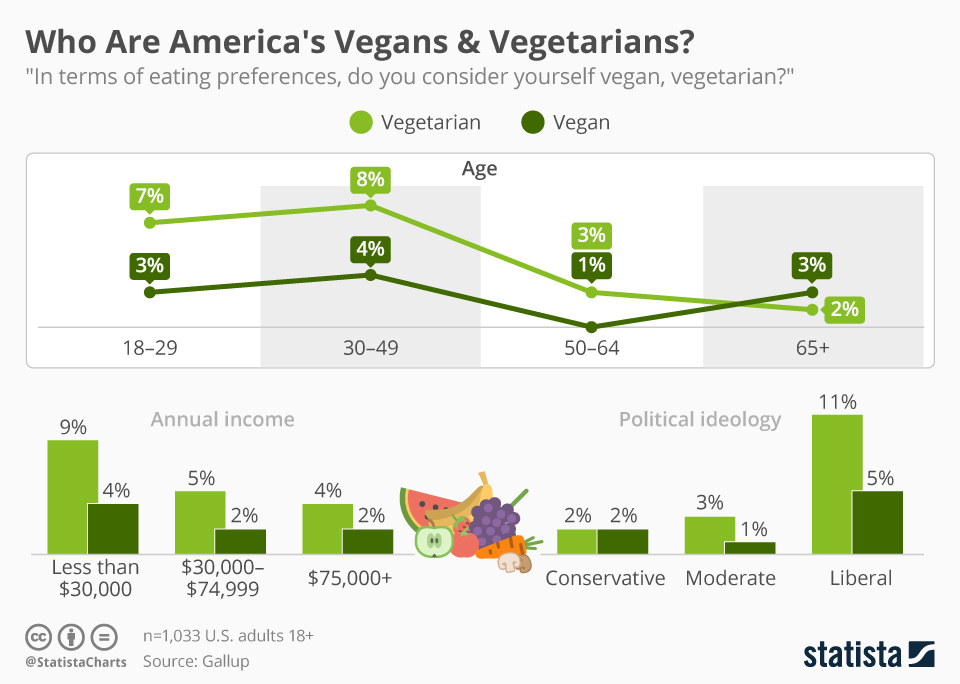 The groups most likely to be vegan trend towards 30-49 years old, earn under $30,000 annually, and follow a liberal ideology. Interesting.

Although the differences are not statistically significant, the trend between income and veganism is surprising to me. I would have predicted that those in higher income levels would more likely be vegan. Depending on how you shop, veganism can be inaccessible and unaffordable to some. Vegan prepared foods, high-quality fresh produce, and meat alternatives can be expensive. Take Beyond Meat for instance, which is priced at $12 per pound. But the largest proportion of vegans lies in the under $30k income bracket. Cost doesn’t appear to hold them back.

Does it come down to budget prioritization? Perhaps these are single vegans without dependents to care for? Maybe vegans, who tend to be idealistic, are less likely to choose high-paying corporate occupations? Or can veganism be more affordable than once thought?

It’d be interesting to dive deeper into the food shopping habits of vegans earning under $30k and understand the income factor more deeply.

A trend towards a liberal ideology isn’t too surprising given similar values with veganism like and social welfare. Another poll supports these findings with 52% of surveyed vegans identifying as liberals, 34% as neutral, and 14% as conservative. It’d be interesting to interview conservative, moderate, and liberal vegans to understand similarities and differences between groups as to the reasoning behind going vegan and the details of their vegan lifestyle.

While there are more vegans under the age of 50 than over, the distribution among young vegans isn’t as rampant with 20-year-olds as I imagined. In the 2018 Gallup survey, there were marginally more vegans in the 30-49 age group (4%) than in the 18-29 age group (3%). Another finding reported that the average age of a vegan is 42 years old.

I come from the millennial, Instagram-obsessed generation where young vegans are popularized on social media. Needless to say, the age distribution was a slightly surprising finding, but a good reminder that just because something is popular on social media, doesn’t mean it’s an accurate reflection of the real world.

A fact that will shock no one: the majority of vegans (74%) are female. The intersection between gender and veganism is complex. Masculinity is often tied to eating meat, with slogans and advertisements spouting “meat is for real men” running rampant. Men may experience different social expectations to eat meat based on the community to which they belong. Whatever the reasoning may be, the result seems to show clearly in gender disparities among vegans.

One finding shows that 47% of vegans do not practice a religion, 34% are Christian, 9% are Buddhist/Hindu, 7% “Other,” and 3% Jewish. The non-religious majority is an intriguing finding. I’d be curious to also know about spiritual practices, and if that differs between vegans and non-vegans.

All around the world, we’re seeing growth in vegan or plant-based lifestyles.

Cities with highest proportion of “vegan-friendly” restaurants are located in countries such as Ireland, South Africa, the Netherlands, England, Thailand, Italy, Greece, and the U.S. 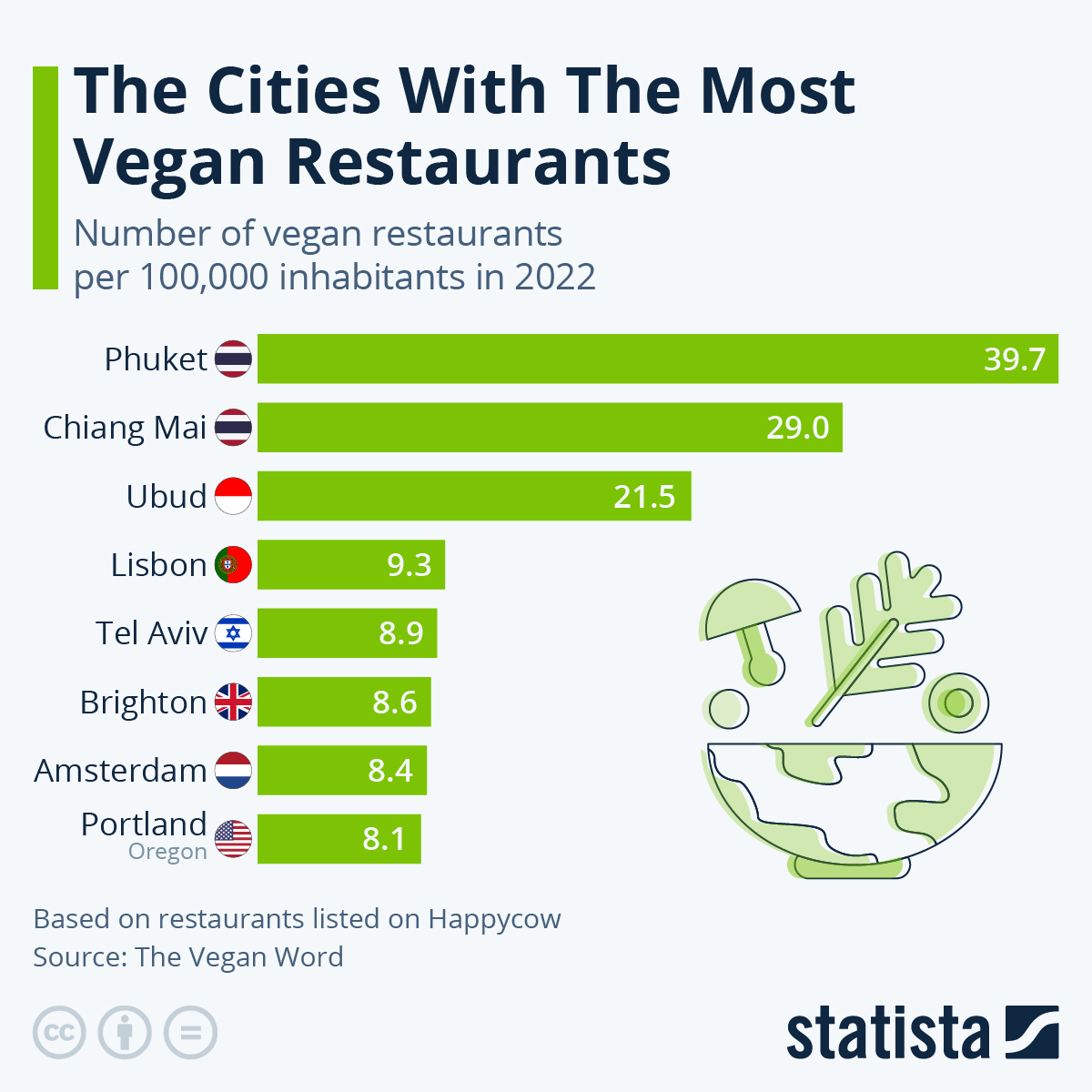 While I tried and failed to find vegan demographics by race, I did find some data on vegetarian demographics shared by Faunalytics. I’m unsure which races were subsumed into the “Other” and “White Non-Hispanic” categories. A close friend once told me that when they think of a vegan they automatically think: white girl. And I totally see why. The image of a white vegan is often perpetuated by the media through promotion of white vegan celebrities, authors, chefs, and activists. This “face of veganism” is shaded predominantly and inaccurately with white skin. The association with veganism and whiteness is problematic as it can marginalize vegans of color and deter people of color from veganism.

There is much to understand about the intersection of race and veganism, and I hate to simplify it here to one measly paragraph. This is a topic for greater discussion than can be contained in this blog post or by my voice (that of a white girl). But it’s a topic that needs to be talked about and understood to a greater extent. To this day, most research on veganism has studied mostly white and middle-class populations, which needs to change.

If we could scrap together the findings, we might allude that “The Vegans” are trending towards being female, lower income, under 50 years old, non-religious, liberals, that exist in various pockets of the world. Of course, this finding is grossly generalized and with the lack of research, we are certainly ill-equipped to characterize vegans globally. But most importantly, putting vegans “in a box” could dangerously exclude and turn away people based on what they look like, how they live, or what they think.

Veganism should be for anyone who wants it. With cultural acceptance, social equality, and equalized access to food and education, we might see even more diversification of the vegan population. And hopefully, we’ll have more diverse vegan voices being shared and admired around the world.

What do you think about vegan stereotypes in 2020?

Also see: 5 Things Acne Can Teach Us If We’re Willing To Listen

Photo by Jens Johnsson on Unsplash