I recently discovered a renowned, vegan-friendly culinary institute right down the street from my apartment.  That sure doesn’t happen every day! The Natural Epicurean Academy of Culinary Arts focuses on whole and healthful foods in a plant-based diet and, furthermore, they emphasize locally sourced ingredients. This is a vegan dream! The Natural Epicurean offers courses in five core healing modalities: Ayurvedic, macrobiotic, vegetarian, vegan and raw vegan. Many students come from all across the country, and even from abroad, to enroll in their prestigious health-supportive professional chef training program. Non-vocational students can take their numerous classes on public course offerings. Personally, I was immediately drawn to one on vegan grilling and charcuterie. Living in the South where barbecue and meat are such a central part of the culture, I was really interested to find out how I  could make the most of the grilling season! I signed up for the class then and there.

On the day of the class, Chef Andrew greeted me with a bright smile as I walked into the classroom. With summer starting to hit Austin hard I was very excited to learn new ways to prepare and grill vegan foods. There were only about 10 other classmates so I knew it would be a small and intimate session. As we sat around a large table we introduced ourselves to one another and I was happy to hear that there were several fellow vegans in the mix as well as some vegetarians and omnivores who were simply interested in eating healthier and expanding their horizons. Chef Andrew started off the class by going over the basic concepts of vegan grilling and charcuterie. I’ve grilled my fair share of veggie burgers and kebabs, but I learned that there’s so much more one can do with healthy and delicious vegan foods! The next part of the class was all hands-on food preparation with my classmates followed by a yummy lunch consisting of all of our dishes. Overall, I honestly feel like I only scraped the top of the iceberg and that there’s so much more I want to learn. Here are some of my favorite things that I learned from Chef Andrew and my class at the Natural Epicurean! We smoked fruits and veggies using a smoker box. Chef Andrew lights some applewood chips with a blowtorch here.

To paraphrase Chef Andrew, when the weather warms up and folks are bringing out their burgers and hot dogs and firing up their grills, vegans need to figure out how to make do. I learned that most foods you can eat raw are good for grilling, including lots of fruit–pineapples, grapefruit, oranges, peaches, avocado, even watermelon and marinated whole lettuce! Many vegan foods are easy to prepare in the style of charcuterie, and smoke flavor adds a whole new dimension to vegan foods.  Last but not least, it pays off to put just a little bit of effort in to the preparation of food before it’s cooked. (This one was especially illuminating for me, a rather lazy cook!) 2. Use color and presentation to invoke more traditional foods when desired.

What’s the point of trying to invoke traditional foods? Food isn’t just nutrition–it’s culture and emotion. And so, when we eat vegan interpretations of familiar dishes, we are partaking in comfort of tradition–without cruelty. The key here is to “invoke” rather than try to replicate: think color, plating, and shapes using natural whole plant ingredients, rather than processed ingredients. In the photo above, we used grapefruit to mimic the color of raw fish in our sashimi. Some other classmates made beets tartare which was reminiscent of more traditional charcuterie. Don’t leave your zucchini on the grill too long! These grill marks look just right.

Grilling is supposed to give foods distinctive grill marks but it’s not meant to overcook them. Fruits and veggies can easily end up limp and soggy when they’re overgrilled, so take care only to grill them for a few minutes on each side–until you see those grill marks! You can baste your fruits and veggies in some non-dairy butter or olive oil before grilling to really make those marks stand out. 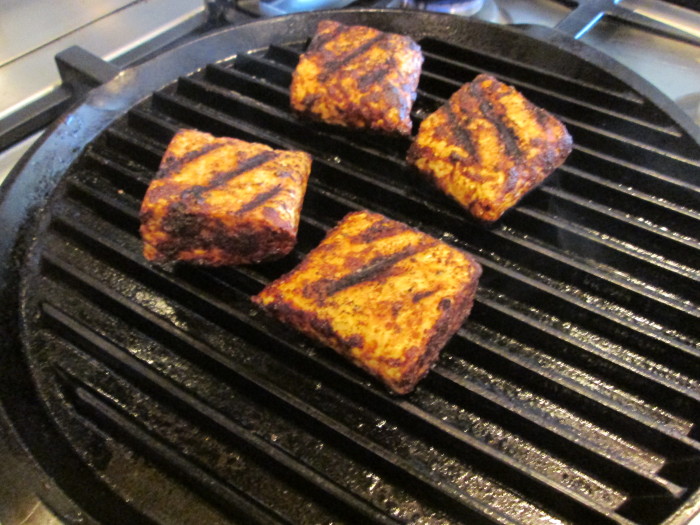 Grilled tempeh in spicy sauce, to go inside our Southwestern Caesar Salad.

4. Use creative cooking techniques to spice up traditional foods.

Try a new combination of spices to heat up your tempeh salad. Smoke your mushrooms before you put them on that vegan pizza. Experiment with some garnish or different presentation and wow your friends at a dinner party. Put those fruit & veggies on a bamboo skewer and grill them for an afternoon snack. Make steaks out of cauliflower! I’m always looking for new ideas to use in the kitchen, especially since I often find myself so busy during the week that I have little time for innovation in that area, so I loved seeing all these new ways to prepare foods that I already knew and loved. Beets tartare, prepared by my classmates. The color and presentation invoke the traditional dish.

I found this class very informative and especially valued the hands-on aspect as well as getting to watch all of my classmates make their own foods. I won’t lie–my favorite parts were probably seeing Chef Andrew bust out his blowtorch and later tasting all of our delicious experiments. If you would like to try their professional program or public courses, check out their website for more information. I, for one, can’t wait to try the next class!

5 Vegan Nutrition Tips for Healthy Nails
Drinking Lemon Water Every Morning Changed My Life. Why This Is More Than A Trend
It's Veganuary! How To Make Plant-Based Diet Work (& Last) For You, From A Longtime Vegan
Here Are The Vegan Trends Of 2022—And What Will Follow In 2023 & Beyond
PREVIOUS
Healthy Dinner: Vegan Sunshine Burgers
NEXT
Healthy Snacks: Yoga Cookies
TAGS
healthy eatingsummertips
SHARE