There is a beloved travel series on The New York Times called 36 Hours in ___. Usually the series focuses on your usual garden-variety glamorous overseas destinations (Barcelona, Florence, Tokyo) or cool US cities (Savannah, Seattle, Portland, Maine), but a couple of months ago it featured none other than my home turf–Upper Manhattan. I felt a point of pride as well as a small fear that our secret will be discovered: Uptown is the hidden treasure in all of New York City, in my opinion. While last thing I want is for our cool-ness to be discovered by the blue-bloods in UWS, UES, Midtown, and the hipsters from Downtown and Brooklyn, thus ruining our street cred and driving up our rent, I do want to share with Peaceful Dumplings the unique charm and lively vegan scene happening right in this historic neighborhood. 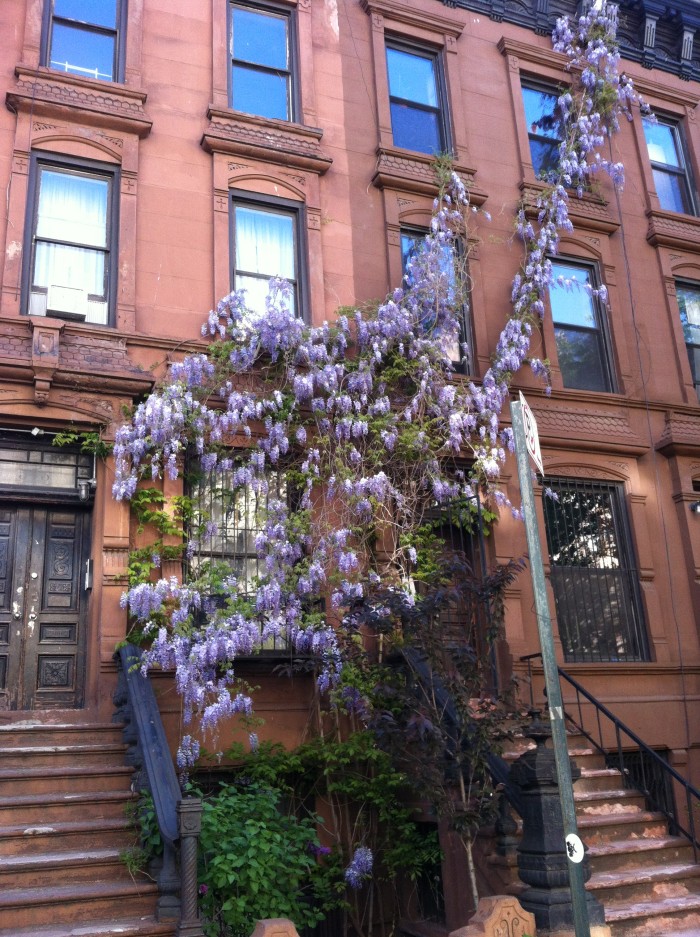 Wisteria on a brownstone on Manhattan Avenue.

Friday: Upper Manhattan designation starts above 110th street (Central Park North). It consists of many neighborhoods large and small, including West Harlem, Central Harlem, East Harlem, Morningside Heights, Washington Heights, and Inwood. Many of these residential neighborhoods are full of these lovely brownstones or Neo-Palladian apartments on tree-lined streets. Grab a latte from one of area’s new cafes (check out Double Dutch on Frederick Douglas Blvd and 118th), and take a leisurely walk admiring the architecture.  If you get hungry, make a quick lunch stop at local favorite Destiny’s for an Everything Raw Wrap or vegan caesar salad featuring roasted chickpeas and creamy tofu dressing. Trip to the cloisters Take the M4 bus on 110th street (Central Park North), which takes you all the way up to Cloisters at Fort Tryon Park. This is one of the most beautiful and romantic museums in all of New York. Here, the remains of medieval monasteries in Europe were carefully reconstructed and brought to life. Look for the famous unicorn tapestries, medieval armor and reliquaries, then sit by the courtyard of Romanesque arches.

For dinner, take the M4 back down to Broadway and 114th for a vegan-friendly, farmhouse fare at Community. I recommend their superb veggie bowl, and their Cherry Old Fashioned for drinks.

Saturday: Go for a walk in Central Park, or in beautiful Morningside Park that divides West Harlem from Morningside Heights neighborhood. Start from the east side and make your way up. Keep going up these stairs – almost there! Overlooking West Harlem from the top of Morningside Park – you feel as though you are on top of the world.

This is one of the most beautiful viewing points in all Manhattan–and the number of souvenir post cards from this exact perspective proves it. Cathedral of St. John the Divine

Just a few blocks away is the famous Cathedral of St. John the Divine, home to the Archdiocese of NY. In any other location in Manhattan, this gargantuan Neo-Gothic edifice would have felt out of place. But situated loftily on top of Morningside Heights, it just feels all the more awe-inspiring. Masses, as well as concerts (many open to public) are held here. Just going in for a quiet moment is also wonderful. Dinner: Head back east for dinner at Seasoned Vegan, a new vegan restaurant that is poised to become an NYC landmark. Traditionally Harlem is known for its Southern-style comfort food, but there is a movement here of taking that culinary heritage and transforming it into delicious, satisfying, inspired vegan cuisine. The Uptown vegan cuisine is distinctly home-y, flavorful, and friendly. Think creamy mac n’ cheeze and “chicken” n’ waffles, not a raw vegan lasagna plate that goes for $24, thirty blocks south. Seasoned Vegan is the clear leader so far–and they represent what New Harlem is all about–community, friendly, down-to-earth, but contemporary and modern. Expect to eat top-notch vegan comfort food, Southern-style, next to ladies in church hats, fashionistas, and couples on dates. Finish off your Southern BBQ meal with raw turtle cheesecake or a chocolate chip cookie–one of the best vegan cookies I’ve ever had in my life. A quintessential vegan in Harlem experience. After Dinner Drinks: Continuing with Classic Harlem theme – go to 67 Orange Street for the best vintage cocktail you’ve ever had. This speakeasy takes artisan cocktails seriously. Don’t ask for a beer and order one of their special cocktails– you won’t be disappointed.

For music, no better place to go than Silvana on 116th street and Frederick Douglas. This cafe, restaurant, and bar in one, is divided into 2 levels. Head to the basement for some of the best live music (bossa nova, cool jazz, swing, lounge, African, and more) I’ve heard in NYC–all free of cover.

Sunday: Head over to Broadway and 115th street for the Sunday farmer’s market. (Bring compost!) Get some fresh vegetables, fruits, bread, and flowers for the week. Walk back through Columbia campus.

For brunch: Go to Silvana’s upstairs cafe for some amazing falafels. You can even shop their eclectic jewelry, clothing, and home decor selection while you wait for the food to arrive. Falafel plate is a must-have.

Art: Afterwards, go up to Studio Museum of Harlem on 125th street (just 9 blocks up north) and take in the mesmerizing exhibits of works by black artists. Bonus: Admission is free on Sundays.

Harlem is still an up-and-coming neighborhood (read: rough around the edges) but that’s part of why it remains so authentic. There is a sense of community and pride here that you just don’t see in other areas of the city. It’s the mix of the old and the new, black heritage and the new influences (such as veganism), that makes this area so wonderful.

What do you think about Harlem? And tell us what you love about your neighborhood!

A Guide To Lugo—From Ancient Roman Heritage To Spain's Best Vegan Food
Vegan In Seoul: What To See & Eat In This Elegant And Thrilling Capital
Must-Try Vegan Foods in Maui: A Vegan’s Paradise for Fresh & Local Foods
Looking For Your Next Getaway? Here Are 3 Best Vegan-Friendly Hotels In The U.K.
PREVIOUS
9 Must-Have Eco Friendly Swimsuits
NEXT
Cabinet of Curiosities: Shopping for Vintage Jewelry
TAGS
dispatchphoto essayvegan travel
SHARE