I’ve met a few guys who’ve expressed interest in the vegan lifestyle, citing the desire to lose weight, feel better, and eat more vegetables and fewer processed foods. While I ensure them that they’re more than capable of coming to the green side (come one, come all!), some of them are concerned that being vegan means sacrifice and loss—mainly, giving up juicy steak for dry soy patties—and potentially losing muscle mass along the way.

First things first—soy patties don’t have to be anywhere in the picture. There are endless, mouthwatering vegan dining options that don’t involve anything “texturized,” etc. Just see Peaceful Dumpling’s recipes for proof!

And second, while the concern about losing hard-earned muscle is understandable (after all, men are inundated with the notion that high protein consumption equals virility), there’s no need to worry that becoming vegan will make one weaker provided you have a balanced diet.

Following a balanced diet, in turn, guarantees you enough protein. In fact, it’s really difficult to lack for protein when you’re consuming enough calories for your size—even if you’re an athlete. (Just ask Vega founder and vegan triathlete Brendan Brazier.)

But enough about protein! You clicked on this article for a little dose of Liam of which I shan’t deprive you!

In my mind, Liam Hemsworth is the ideal dude to casually point out to your veg-curious beau: Oh yeah, did you know he’s vegan? Hmm. While I never waste an opportunity to point out a vegan man to my increasingly plant-loving husband*, there’s something about Hemsworth’s classic handsome looks and ripped bod that illustrate a mainstream guy can be vegan and strong. 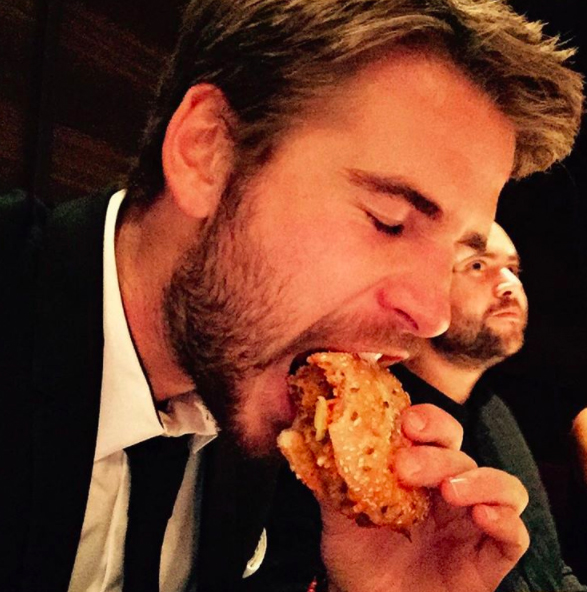 You’ll also love why he’s stayed vegan: “I went vegan for the Independence Day shoot, and I felt really good so I continued. I have more energy, my sleeping is better, and I have more endurance in my workouts,” he explains. (Hear that, guys? Veganism is workout-friendly!)

“Also, I did some research about cruelty to animals. Ethically, I didn’t feel good about supporting those industries. It’s not good for the environment, it’s not good for people and certainly not for animals.” Indeed, animal agriculture is a leading driver of climate change. Liam with his rescue dogs Dora and Tani.

But what about the elder Hemsworth, Chris, you ask?

Liam says that he’s encouraging his brother to eat more plant-based foods to help with digestive problems—and that Chris is rather amenable to a healthier diet. Woohoo! You can do it, Thor! *Before you worry that this article will have my husband super jelly, it was *his* idea that I spread the word about vegan hunks. So supportive 😉