Lenny Kravitz joins a line of male celebrities (like Common) who are showing how sexy and strong veganism is. On the cover of Men’s Health magazine, Kravitz shows off a body so hard it could cut diamonds, all rippling pecs and an eight pack (yes, I counted). And the rockstar attests that his vegan diet keeps him young and full of energy.

During the pandemic, Kravitz has been staying at his estate on Eleuthera island of the Bahamas. Here, he organically grows his own vegetables and fruits, like cucumbers, okra, watermelons, passion fruits, sugar apples, soursops, pomegranates, coconuts, and mangoes. 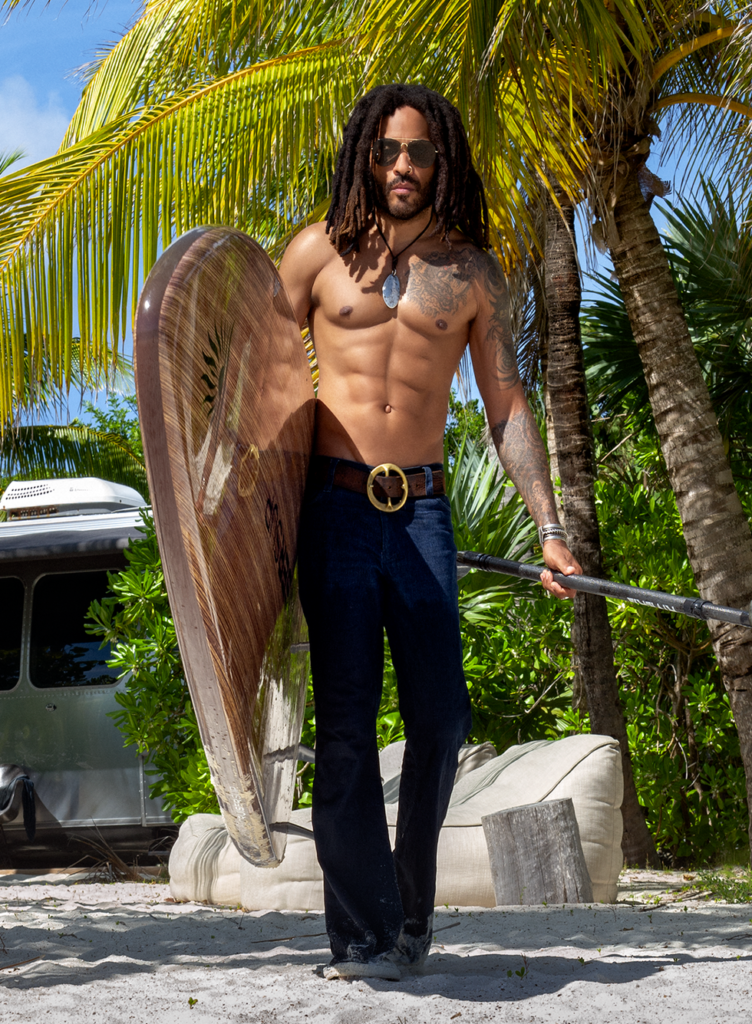 “What we have is greens, and more greens,” Kravitz says in a video, opening his immaculate fridge and casually caressing a bread fruit. (Note: If you wonder here what it might feel like to be a bread fruit, me too.) “Over here we have soursop, which is my favorite.”

“I’m vegan, and primarily raw. I’ve done extensive raw diets, where I eat raw for a year…There will be times when I don’t take any sugar…I’m very careful about what I put into my body.” Kravitz feels his best when he bases his diet on fresh, seasonal vegetables and fruits and sautéed greens.

Back to the earth #earthday #farming #vegan #organic #nongmo #letloverule

“It’s a combination of eating all these things and working out and keeping my muscles and joints in shape, so I can do what I do, which is get up on stage and play music, and have a body that feels free, so I can express myself,” Kravitz explains. While it’s true that a vegan diet often helps slim down (with studies showing vegans burn calories faster), it’s not all vanity—maintaining an optimum health and vitality has a direct correlation to work. But Kravitz keeps things balanced by indulging in his favorite treats every so often. “My cheat meals consist of pasta, bread, pancakes, waffles, carbs, carbs, and more carbs.”

Kravitz’s compassionate, peaceful philosophy informs not just his diet, but his music—the primary way in which he expresses and advocates for beliefs. His very first album, Let Love Rule (1989), spoke up about systemic racism in tracks like “Mr. Cab Driver.” “Let love rule” also has stuck around as his mantra throughout the decades, as he continues to release songs like “We Can Get It All Together” (2018)—an earnest anthem-call to bring humanity together, which seems almost too on-the-nose in 2020. He continues to speak up against racism and sexism, while raising his two rescue mutts and exploring organic farming at his 1,000-acre farm in Brazil. (His estate is equipped with an open-fire grill, an essential in the country—”depending on your preference, we can grill vegetables,” Kravitz says.)

What strong and charismatic vegan men like Kravitz show is that meat-eating is one of the foundations of toxic masculinity that is every day less in tune with the realities of 2020. It’s a relic of the past that we must turn away from—for our health, the animals, and the planet. You don’t have to be a rockstar to defy the toxic paradigm we’re living in—although you might begin to look like one, as a delicious bonus.

Yoga Flow For December: Slowing Down And Setting Intentions
Don't Let Cold Weather Get In The Way Of Your Fitness Goals—Here's How To Keep It Up
How To Workout And Rest (!) Optimally According To Your Menstrual Cycle
Attitude Of Gratitude Yoga Flow For November (Video)
PREVIOUS
I Spent Under $50 On My First DIY 3-Day Juice Cleanse. Here’s Why You’ll Want To Try It
NEXT
Are Organic Fruits And Conventional Veggies The Best For The Planet? An Investigation
TAGS
celebritiesfitnessraw veganvegan celebrities
SHARE