An Australian advertising agency created these images to promote the Sydney International Food Festival. Each flag is made of foods that represent the country. Let’s take a look at the ones that were made of vegan foods, shall we? India – curries, rice, pappadum wafer – naturally, India is number 4 on our list of Most Vegan Friendly Countries in the World 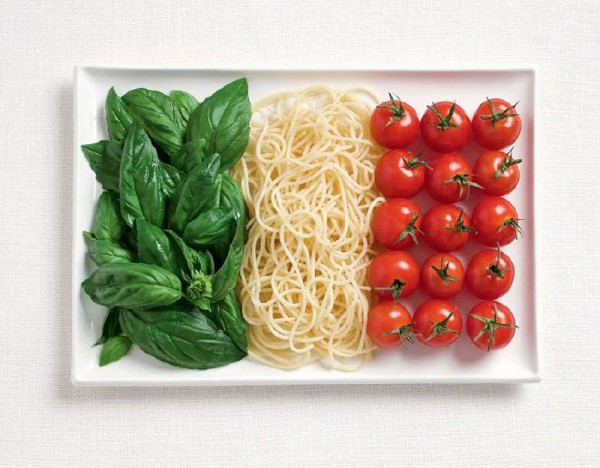 Italy – basil, pasta, tomatoes – and #2 on the aforementioned list. Told ya! Korea – gimbap (seaweed rolls that are generally vegetarian with eggs, but can be made vegan), dipping sauces. And #3 on our said list. (There’s been a lot of controversy here at PD whether Korea is truly vegan-friendly and I must admit, I might be biased because my cousin in Seoul is a very popular blogger/food stylist with several cookbooks, one of which is vegan. I think there is more sleuthing and pow-wowing to do here–true investigative journalism.) Lebanon – Lavash, fatoush, and parsley…I called Israel out as #6 on our list, and since Lebanon is a neighbor geographically and gastronomically, I’ll say that it was a good call. Vietnam – rambutan, lychee and starfruit! This looks more like what you’d find on the ocean floor, don’t you think?

5 Tips on Traveling as a Vegan