Black seed oil has been touted as the ultimate cure-all for everything except death, and that, my friends, is why I made it my mission to get my hands on it.

Black seed oil, also known as Nigella sativa, is undoubtedly an exceptionally nutritive oil with myriad health benefits. There are several seed derivatives in different types of black seed oils (sesame, black currant, caraway). The type of seed in particular that receives the pivotal amount of praise in oil form is that of the black cumin. This magnificent cancer-fighting and liver-supporting oil has been utilized in several astounding ways since ancient times, with a particularly long history of use in Egypt. Fun fact: It is black cumin seed oil that was discovered in King Tut’s tomb, as it was believed to be a vital tool in the afterlife. For those seeking to achieve glowing skin, it is worth mentioning that the oil was also extensively used by ancient queens Cleopatra and Nefertiti as one of their beauty regimen staples. Thymoquinone, an active compound rich in antioxidants and tumor-reducing properties, is the chief ingredient in black seed oil, and may be one of the biggest reasons for sudden renewed interest in this fine oil.

Recently I saw black seed oil heavily promoted on almost every social media platform; it seemed as though everyone and their mamas had this panacea. I was determined to see what the hype was about regarding this alleged powerhouse for vitality. So, I bought a 4 oz bottle of this prestige substance and it was expensive, as expected. Health is wealth (at least in my eyes), so I didn’t complain much regarding the price. Instead, I was more than ready to embark on this journey to enhanced wellness. I took a teaspoon of the oil followed by water before breakfast everyday for a month; here is a list of what I’ve personally experienced.

What Happened When I Took Black Seed Oil For A Month (Hint: Hair Growth!)

1. Increased sleep: Boy, was I sleeeepy! After only 3 days of ingesting the oil, I could feel the effects immediately and took at least two consistent naps each day. The oil was also very strong and bitter; it essentially tasted how I would expect motor oil to taste like (bleh). In short, insomnia was the least of my worries with this oil.

2. Reduced appetite: Foodie by nature, I was quite taken aback when I realized I was not as hungry as I usually am while taking this oil. After eating my usual breakfast (fresh fruit and sometimes pancakes), my body wasn’t craving much more. Most of the time, all I needed to satiate me was a light lunch or dinner and I was good for the remainder of the day. This was a major relief and a new experience for me as I tend to have a huge appetite and battle with constant lingering hunger. A recent study published in Bioscience Reports confirms what I personally experienced: black seed oil or nigella sativa, as it is also known, reduces and slows down carbohydrate absorption through the GI tract. Slower blood sugar rise means you experience less sugar rush and crash, which naturally makes weight loss easier.

3. Good-bye bad cravings: The oil surely kicked that bad junk food habit to the curb. Though I tend to keep vegan processed foods to the minimum, cravings do pop up every now and then. While taking black seed oil, it was very easy to fight the urge to go out and eat a sugary, oily vegan donut or a juicy, greasy veggie burger. I was also able to save money cooking my meals at home–a win-win!

4. Lessened menstrual cramps and flow: On a scale from one to ten, my period cramps are generally a strong 12, especially on day one of my menses. After only a week’s worth of the oil, my cramps weren’t nearly as torturous as they usually are. In addition, my first day flow was dramatically lessened.

5. Hair growth: I slowly but surely noticed my hair’s progression when I looked in the mirror and finally saw it grazing my shoulders. I did not hesitate to link the growth to the the oil. This was purely from taking the oil internally, so I can only imagine what effect it will have on my hair once I begin massaging my scalp with it.

6. Diminished migraines: Unfortunately, I tend to be very headache-prone, and black seed oil came to my rescue whenever one of those throbbing nuisances crept up on me. It usually took about 10-20 minutes before the pain subsided, and worked more effectively than any pain pill I’ve taken in the past. This makes sense since studies show black seed oil is effective in treating nervous system disorders, including Alzheimer’s and neurotoxicity.

7. Internal deodorant (not kidding!!): The longer I took the oil, the less deodorant I needed. I went from applying deodorant daily twice a day to only needing one application or none at all.  This is what shocked me the most, considering 1.) natural deodorant is known for not being long-lasting and 2.) this was during the summertime, and Louisiana heat is NO joke! I did not require much deodorant due to the simple fact that my underarm odor was practically nonexistent.

8. Awesome laxative/diuretic: May be TMI for some, but I’d be doing a disservice by not mentioning the wonderful effects this oil has in aiding the removal of waste. If you are constantly in a state of constipation, worry not; this oil will help you go, if you catch my drift. Going to the bathroom upon waking up in the morning is now the norm for me.

9. Faded skin scars (hypopigmentation): I was amazed to see how much of an effect black seed oil had on the few depigmented scars on my face. I feel like hypopigmentation doesn’t get much recognition as opposed to hyperpigmentation, but that’s another topic. It didn’t occur overnight, but I gradually began to notice pigment reappearing on those spots. In an effort to speed up the healing process, I will now begin using it twice a day, daily on my scars. The oil is also great for combating dry skin, and has given my face a noticeable glow. According to a 2017 meta-study, black seed oil is antibacterial, antiviral, antifungal, anti-inflammatory, and anti-parasitic. It is effective in healing wounds, acne, psoriasis, vitiligo (severe form of hypopigmentation) and even provides some sun protection. As a precaution, it is advised to dilute black seed oil with water or carrier oil before applying it topically, to prevent inflammation.

10. Clearer sinuses: Before taking black seed oil, my nose was constantly stuffy. It feels good to actually breathe now without my nostrils feeling trapped. I guess it’s safe to say that black seed oil is a “breath of fresh air,” pun intended.

In essence, black seed oil is a God-send, literally! As mentioned by the late Prophet Muhammad (peace be upon him), “Use this black seed regularly, because it has a cure for every disease except death.” It will definitely be added to my superfood staples. 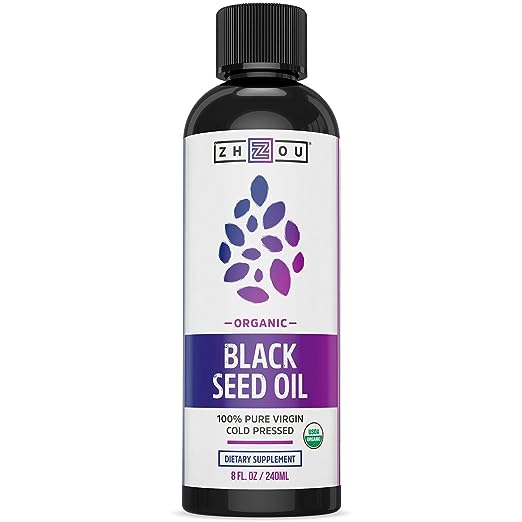 How has black seed oil changed your life?

Also by Dontrelle: Anti-Age Your Mind With These Superfoods & Herbs For Your Brain

Related: The Vegan Collagen Supplement That Alicia Silverstone Swears By

How To Celebrate Valentine’s Day Ayurveda Style (For Singles & Partners)
I Tried LeafSide Meals, Whole-Food, Plant-Based Meal Delivery Service. Here's My Review
How I Fight The Winter Blues: A Day In The Life Of A PD Editor
These Vegan-Friendly Hygge Tips Bring Coziness And Pleasure Back Into Your Life
PREVIOUS
How Climate Change Is Affecting Your Fertility
NEXT
How I Overcame My Fear Of Open Water Swimming To Complete My First Triathlon
TAGS
digestionholistic healthnatural beautyvegan beautywellness
SHARE

Dontrelle Cargo
Dontrelle Cargo resides in New Orleans, LA and has been a strong advocate for health and wellness since the tender age of 14. Her passion revolves around anything dealing with nature—natural remedies, outdoor activities, herbalism, essential oils, etc. She's a foodie! Her all-time favorite therapeutic activity is cooking, and she is always eager to try out new vegan recipes.
View all author posts →